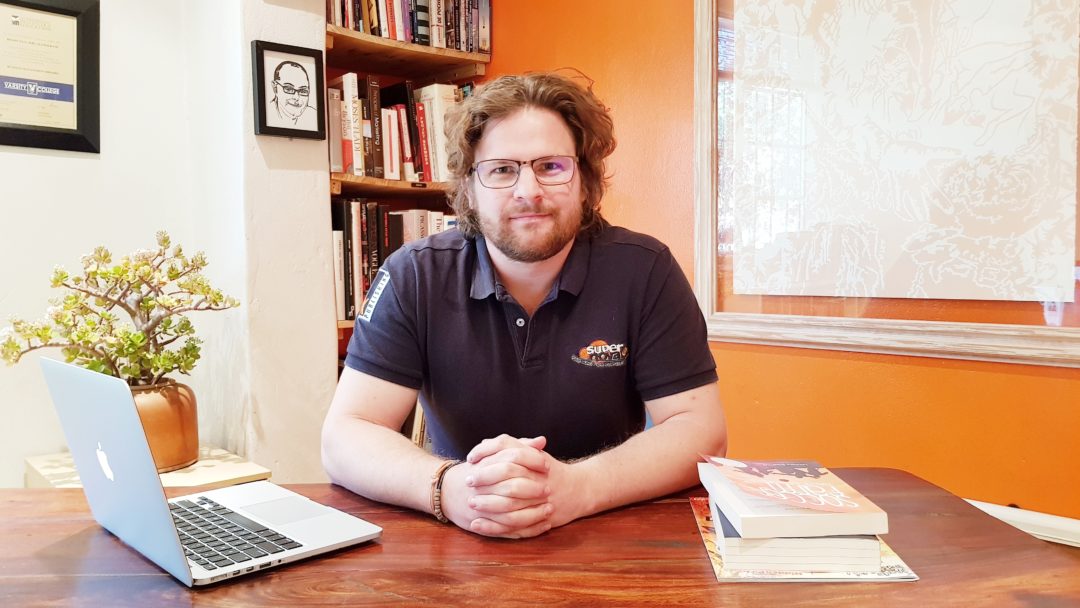 His unique experience and point of view regarding the publishing industry has formed a publishing philosophy which centres on alternative methods of production and distribution. Benoit speaks at book industry conferences and seminars and presents regular guest lectures at the University of Pretoria on a range of topics, from publishing, entrepreneurship, literacy and building a book-buying culture. Through him, BK Publishing enjoys close ties to industry bodies such as the South African Book Development Council, the National Editors’ Guild, the South African Book Fair and the Publishers Association of South Africa.

Benoit is an avid illustrator, designer, photographer and writer and contributes regularly to Supernova magazine. His illustrations have also been published in books locally (MBLS Publishing) and internationally (University of Dayton Press). Between 2005 and 2011 he was the publisher and editor of A Look Away magazine. He published 15 editions which featured hundreds of artists and provided a platform for over one-hundred interns to gain experience in the publishing industry. A Look Away became a respected and well-loved publication.

Metz and Bop and the Big Library Theft

In 2009 he launched the book Metz and Bop and the Big Library Theft, which sold over 5000 copies in hand-to-hand sales to children around South Africa. This book was used in entrepreneurship workshops by Save the Children UK in disadvantaged regions of South Africa. The range of dynamic distribution and marketing models that made this project a success earned Benoit recognition from international organisations, the press and academics in Europe and the UK.

In 2011, Benoit founded BK Publishing’s flagship magazine Supernova, the mag for curious kids. Supernova is an educational magazine aimed at children between the ages of 9 and 14. Through this bi-monthly publication, Benoit aims to make children aware of issues which affect them, their community and their environment. Benoit’s vision is to build Supernova into a household brand that is read and loved by children the world over.

Benoit has secured exclusive rights to import and distribute the best-selling US educational kids’ magazines, Highlights™ and Highlights High Five™. Under the banner of Kidsmag.co.za, Benoit hopes to establish BK Publishing as a leader in children’s content.

Benoit’s other brainchild, Preflight Books is a unique production arm of BK Publishing. Through Preflight Books, BK Publishing is able to provide publishing services to the public as well as other publishing houses. It draws from BK Publishing’s strength in publishing management and production and Benoit’s vision for bibliodiversity through self-publishing. Through this service, authors and publishers are paired with a publisher who manages the project from manuscript development, to editing and layout, to printing. Benoit plans to increase the service offering by taking the service online and providing authors with a platform to sell their books and reach their audiences.

Since 2015, BK Publishing has been a regular service provider to Grupo Santa Maria (Grupo SM), Spain’s largest educational publisher. Every year, Benoit has successfully secured increasingly larger contracts to produce, write and edit textbooks and workbooks for the Spanish education system. These projects have helped secure the business financially and have contributed greatly to general management of the entire business. Benoit and the BK Publishing team are now seamlessly integrated with their counterparts at Grupo SM.

Following on the success of the Grupo SM partnership, Benoit is actively marketing BK Publishing’s production service to other European companies and has plans to market and service the growing publishing industries in the rest of Africa.

The future of BK Publishing

From its humble beginnings in Benoit’s bedroom to the internationally positioned business it is today, BK Publishing has grown in leaps and bounds. Benoit’s vision is to grow BK Publishing into a major player on the African continent and to have a significant influence on the lives of young people around the world.