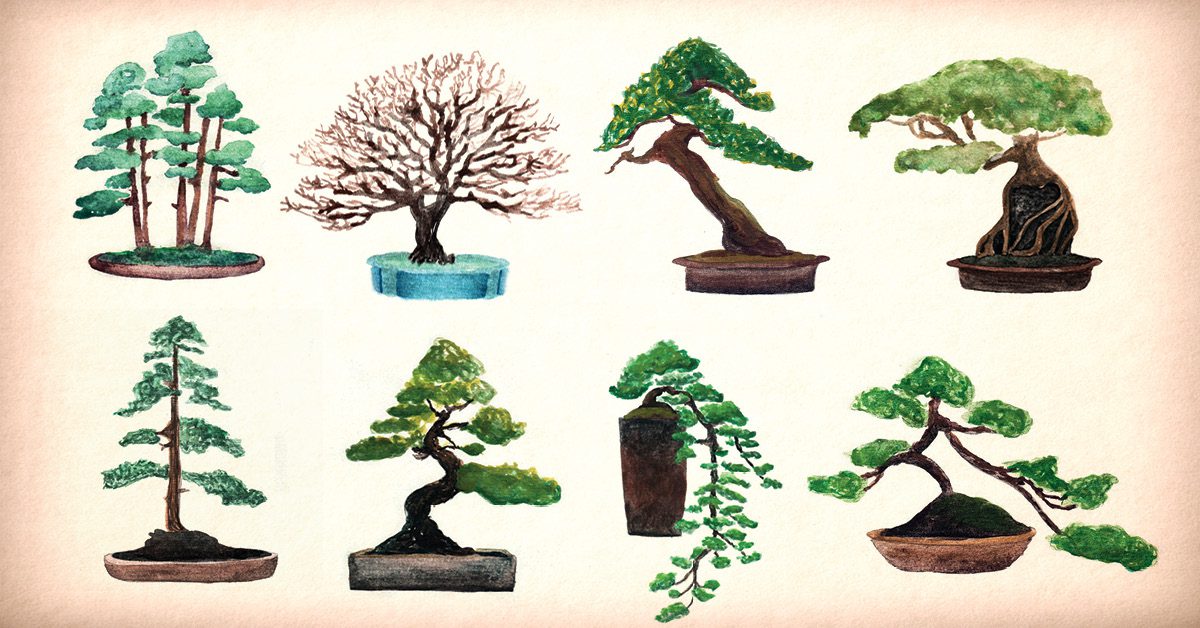 Bonsai originated in the East around 1000 to 500 BC. This Eastern art became more prevalent in the Han, T’Sun and the Tang Dynasties in China. Tomb paintings depict the Crown Prince Zhang Huai having movable landscapes carried around for his personal enjoyment in 706 AD. Bonsai was a sign of wealth and royalty. It was initially introduced to Japan by the Zen Buddhist monks from mainland China. The art was elitist among the rich where the art was perfected over many years. It was only after World War II that the art of bonsai was adopted by Western culture. Bonsai uses only plant species where the trees’ leaf size shrinks and reduces if the trees’ roots are limited to a smaller space.

Multiple trees and their root systems grow together. The most developed tree is in the middle of a large, shallow pot.

These bonsai are normally shedding trees with fine, straight branches. They grow at a third of a tree’s height. They form a ball-shaped top in winter.

Branches are grown to taper off. This is important as it must be clearly noticeable. This style often occurs naturally in nature.

This is a very common bonsai style where the trunk is manipulated to form an s-shape where branches extend at every turn of the trunk.

Get this!
Fruit on a bonsai doesn’t reduce in size. The small bonsai is capable of growing normal-sized fruit because it’s genetic.

The bonsai is meant to depict a tree, leaning in one direction to show the natural forces of wind.

SekiJoju (Growing on a rock style)

The bonsai grows on rocks as it moulds into the cracks of the rock.

Some trees grow downwards, often due to snow or rocks in nature. This bonsai needs a deep, tall pot as the trunk grows downwards below the soil line.

This is similar to Kengai cascade style, but the branches don’t grow below the container.

Growing your own Bonsai Trees