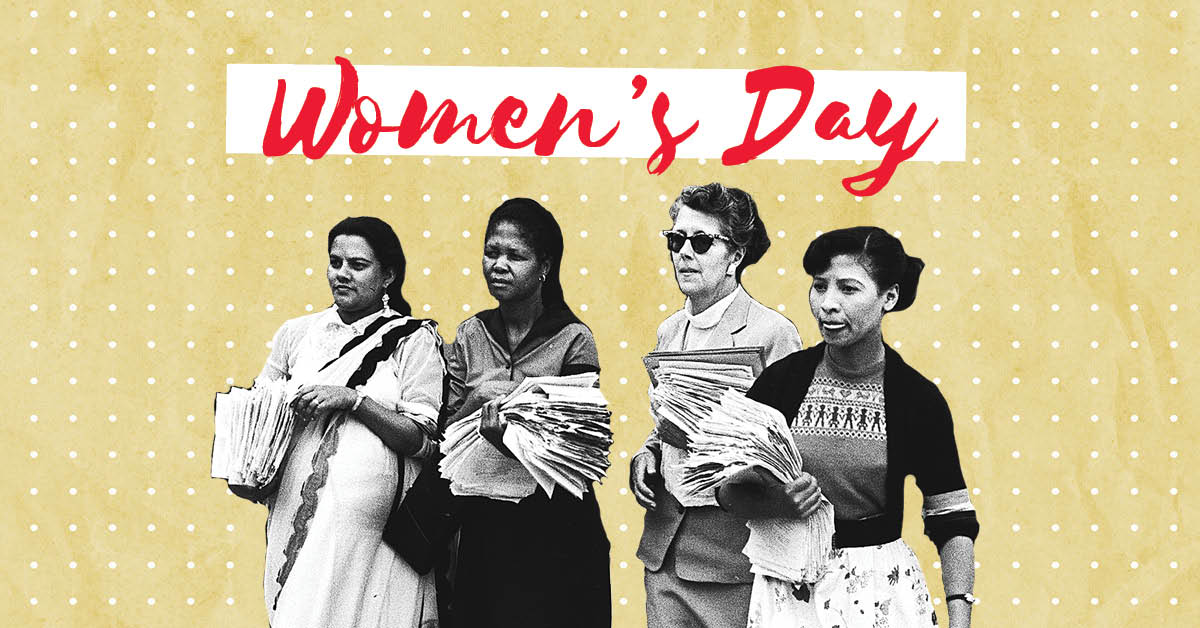 On the 9th of August 1956, 20000 South African women of all colours and cultures marched to the Union Buildings to protest South Africa’s pass laws, which restricted where people of colour were allowed to go. The government wanted to make changes to the pass laws that would have made it even harder for women of colour to move around the country. We remember this heroic act by celebrating South African Women’s Day on the 9th of August every year. Four brave women led this peaceful protest: Lilian Ngoyi, Helen Joseph, Rahima Moosa and Sophia Williams de Bruyn.

To celebrate Women’s Day, we have put together a list of 21 remarkable women – activists, artists, sportswomen, inventors and everything in between.

Lilian realised that to win the fight against apartheid, she would need to get help from other countries. So she took an illegal trip to England, Russia, Switzerland, China and Germany to meet with other women. She was arrested when she came back to South Africa. Lilian was one of the four women who led the 1956 women’s march.

Helen was a British woman who moved to South Africa and joined the fight against apartheid after she realised how badly people of colour were being treated. She found out that the government was forcing people who broke the pass laws out of the country, and tried to find them and reunite them with their families. Helen was arrested in 1962, six years after she helped lead the 1956 women’s march.

Rahima fought for the rights of people of colour in South Africa during apartheid and was a very important leader in the 1956 women’s march in South Africa.

Sophia is an apartheid activist that fought for the rights of Coloured people and hid other anti-apartheid activists in her home while they were on the run from the police. Sophia gave a speech On Women’s Day in 2016 about her role as a leader in the 1956 women’s march.

Irena was a Polish woman who helped smuggle 2500 orphaned Jewish children out of the dangerous Polish ghettos during World War II. Even when she was captured and tortured by Nazis in 1943, she never gave any information up about the children she had saved.

Khutulun was a Mongolian warrior and noblewoman who fought in a number of battles. She challenged all her suitors to a wrestling match. If they won, she would marry them; if they lost, they would gift her 100 horses. Khutulun was rumoured to have tens of thousands of horses and ended up marrying for love.

Yagazie is an amazing photographer from Nigeria. She has taken photos that show how important education is for girls in poor and violent areas. She also helps trauma survivors adjust to their new lives. Her photos have been published in many famous magazines and newspapers.

Hedy was an Austrian-American actress and inventor. During World War II, she invented a system that stopped missiles from being ‘hacked’, allowing the missiles to successfully reach their targets. Hedy never received any money for her invention and only got credit for it much later in her life, even though her technology was used to make wi-fi and Bluetooth.

Wangari founded the Green Belt Movement, which has led to over 51 million trees being planted and 30000 women being trained in ‘green’ jobs in Kenya. These jobs help the workers earn money while protecting Kenya’s environment. Wangari was the first African woman to win the Nobel prize.

In 1976, at the age of 14, Nadia became the first-ever woman to get a perfect score of 10 in gymnastics at the Olympics. She received another 8 perfect scores and won 5 gold Olympic medals for Romania before she retired. Nadia now coaches young gymnasts.

Autumn is a young Canadian who fights for the clean water rights of all people. She is raising awareness about how important it is for everyone to have access to clean water and educating people about their rights to water. Because of the good she does, Autumn is known as the ‘water warrior’.

Nancy, who was born in New Zealand, joined the French Resistance to fight against the Nazis in World War II. When the Gestapo (German Secret Police) offered a lot of money to anyone who could kill Nancy, she fled from France to London and became a spy. Six months later, Nancy parachuted back into France and helped lead 7000 French Resistance members in battle against the Nazis.

Alice grew up poor in the southern United States of America. Segregation (laws in America that unfairly disadvantaged people of colour) made it difficult for Alice to train at a proper sports space, forcing her to build her own high jump bar out of sticks and rope. Her hard work paid off and Alice Coachman became the first ever Black woman to win a gold medal at the Olympics in 1948.

When Benazir was 35, she became the first female leader of an Islamic country, Pakistan. Benazir built schools and brought electricity to the countryside in Pakistan while she was in power. She was assassinated in 2007, but is still considered to be an inspiration for women in the Muslim world and everywhere else.

Tarana started the #metoo movement that helped people to come forward and not feel ashamed about men who have bullied women and hurt them. Tarana also works towards helping girls and women of colour who have been disadvantaged in America.

Tsitsi is an award-winning Zimbabwean author who is focused on growing ‘the arts’ in Zimbabwe. She was recently arrested for protesting against the Zimbabwean government for running the country poorly and for not respecting the human rights of its people.

Maria was an Italian driver who was teased by her brother for her slow driving. She began driving for Maserati when they saw how good she was. Maria proved her brothers wrong by becoming the first ever female Formula One driver.

First Woman to Travel Around the World

Theresa is a senior tribal chief from Malawi, where 50% of girls get married before they turn 18. Theresa has ended over 1000 child marriages and has stopped many more from happening. She also uses her power to show girls, boys and their parents that education is a right that every child deserves.

Sophie was part of a group called The White Rose that made and handed out pamphlets encouraging people not to support the Nazi party. She was found out and killed by the Nazis, but the pamphlets she was distributing were copied and millions were dropped over Germany, encouraging other people to be brave and stand up to the Nazis.

Yvonne is one of the most loved South African singers and was the first Black child to appear on South African TV in 1981. While she might be known for her singing in South Africa and in the rest of the world, Yvonne is also the founder of the Princess of Africa Foundation, which fights and helps educate people about malaria in Africa.

Who is a woman that inspires you? Write to us and let us know!