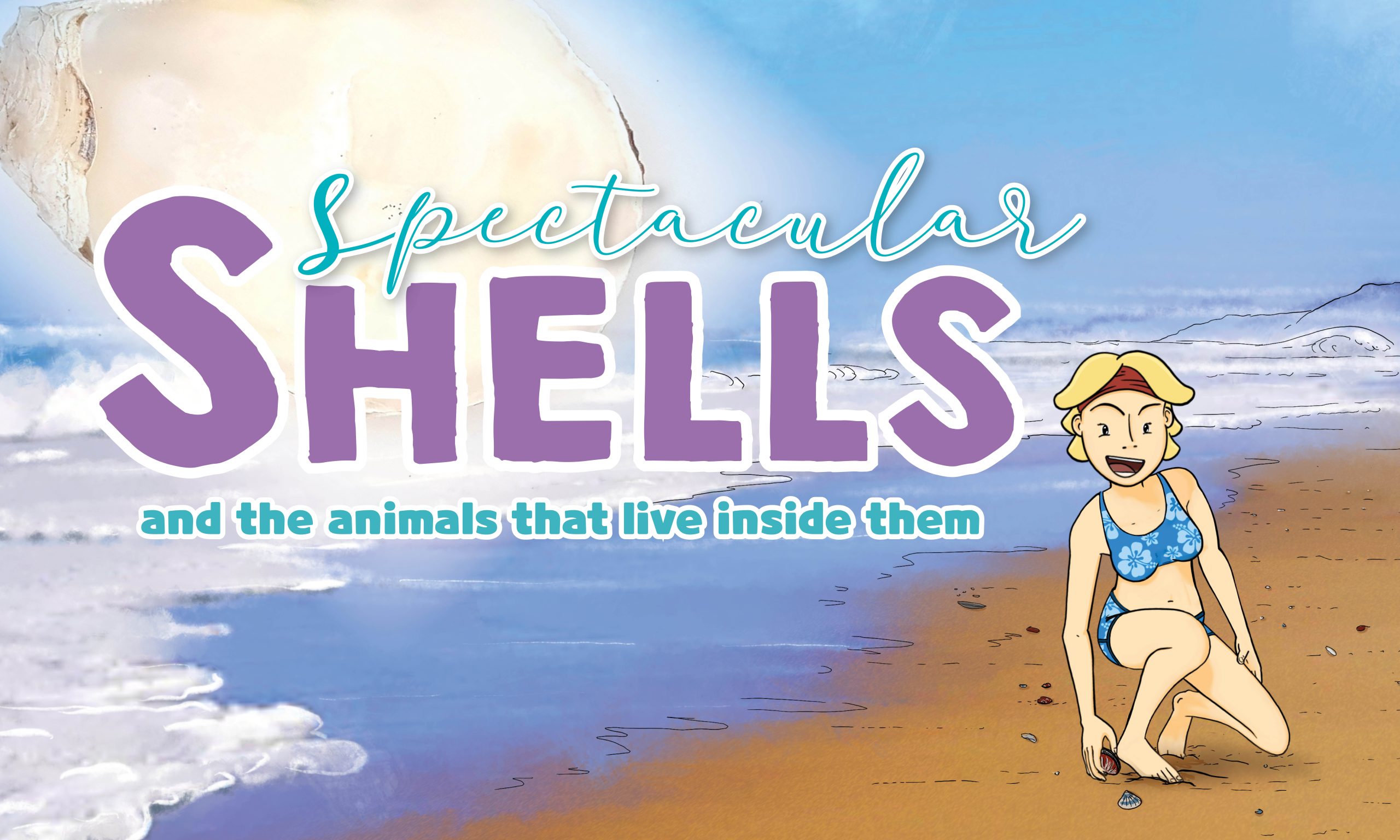 If you take a walk along the beach, you’re bound to find hundreds – if not thousands – of different types of shell. Some are large, some are small, and some are so beautiful it’s hard to believe that an artist did not carefully paint each and every one of them. Every beach has its own types of shells, depending where in the world you are. You could spend all day long looking at all of these beautiful shells, but have you ever thought about their lives below the waves and the animals that live inside them?

What is a shell?

Not all molluscs have shells. For example, an octopus is a mollusc, but does not have a shell.

What are they made of?

Seashells may look very different, but almost every shell you can find on the beach is made of calcium carbonate. Another word for this is mineral calcite, which is actually the same material that makes up stalactites and stalagmites found in caves. Along with the calcium carbonate, shells also have a small amount of protein. This makes the shell light, but very strong, and provides protection for the soft, slimy, vulnerable animals that live inside them. An organic protein also covers the outside of the entire shell, which makes it water resistant and durable.

How are shells made?

It all starts with baby molluscs hatching from tiny eggs. When they are a few days old, molluscs start to build their shell, layer by layer, using a body part called the mantle. They use some protein from their own bodies to build a strong frame. They fill this up with calcium carbonate taken from the salt and chemicals of the sea.

As their bodies grow, molluscs have to enlarge their shells by adding new layers of calcium, carbonate and proteins. Sometimes, you can see how a mollusc has grown by looking at markings on the inside and outside of its shell. If their shell gets damaged, molluscs can repair it using the same ingredients they used to make it.

Over time, molluscs grow shells that best help them to survive in their environment. This might mean having an extra hard shell that protects them against animals that want to eat them. It can also mean having a shell design that makes it easy for them to dig into the sand and escape quickly.

Humans build their bones using some of the same chemicals that molluscs use to build their shells.

What types of shells can I find on a beach near me?

There are many different types of molluscs living in the ocean. This means that they come in many different shapes, sizes and colours. This wide range in size, colour, shape and texture is for good reason – to ward off predators!

Different seas around the world offer different diets for molluscs to feed on. The colour of a shell depends mainly on what a mollusc has eaten. The large diversity of food in tropical waters gives molluscs more colourful shells. Colour also plays a large role in how the mollusc camouflages itself from predators.

They also come in all sizes. This can be related to the environment where the mollusc grows. Colder regions generally mean slow-growth, so the molluscs do not grow very big here.

There are more than 50 000 types of mollusc shells! Some open like clam shells, while others are spiral shaped and have one opening where the animal enters and exits the shell.

Shells are important for the environment

Shells are very important to the environment in a number of unique ways. They may no longer be homes to molluscs, but they can still be used as homes by hermit crabs or young fish. Birds can also use them to build their nests. They help stabilize beaches and anchor seagrass. When they break down, they provide nutrients for the organisms living in the sand.

But with so many people visiting beaches and collecting them, the number of shells is decreasing! This will have a negative impact on beach erosion and might mean a drop in the diversity of animals and plants that depend on shells, like crabs, small fish, algae and seagrass.

Next time you think about collecting some shells from the beach, think about all of the animals that need them more than you do! A good choice is to take pictures of them instead of taking them home.